Today in class, we discussed colors, the illusions of colors, the color wheel, etc. For the first assignment, we created 5 blacks of colors and copied them and basically we learned how to take out the hues.

we had to evenly space them out and we basically chose random unrelated colors.

Next, we learned how to use the ruler tool and we created three squares of the same color and created another set of 3 squares at about 45 degrees from our original squares and made it as if they were “transparent” or “on top of” each other.

We then did a method of isolating or making the middle square where the two squares overlapped and changed the color to different contrasts, hues, etc.

Next, we created a method for making an illusion. The illusion is basically we have two squares next to each other of opposite colors, for this example it was black and white. We made the background a 10% grayscale and the squares in the middle of the black and white squares a 50% grayscale. The illusion was that the square in the middle looked as if it was the same color as the background grayscale, despite them having a dramatic 40% grayscale difference.

The similarity between the inner square and the background is more noticeable in the black square in my opinion.

When then created another one using colors, for example I chose a dark blue-ish color and then we selected its complementary color for the middle (of both squares), and just selected a lighter contrast for our other square. 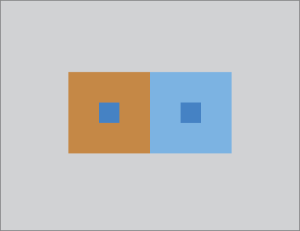 This example demonstrates how the two blues in the middle look slightly different from each other with a different surrounding color.